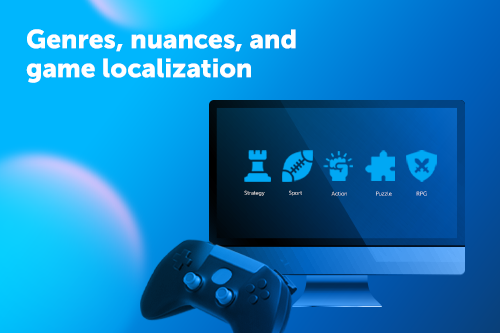 Game localization is a relatively new industry, though it traces back to the 1990s. In the US, the first localized game is considered to be Pac-Man, the arcade classic developed by Namco and released way back in 1980. But back then, there was no theoretical base for game localization. The process of translating a game looked much like any other translation.

As we now know, however, localization process differs based on the content: movies, TV shows, books, and games — all have their nuances that need to be built into the translation and adaptation process. Besides, every game genre has its own special features that should be taken into account.

Let’s take a look at what’s important to keep in mind when you’re translating different games.

Just remember: while there are endless genres and subgenres, there’s no single classification system. With that in mind, we’re going to dig into the most common types of video games.

The plot is generally secondary when it comes to action games, as players focus more on good hand-eye coordination and reaction time. Without much text to worry about, localization isn’t a large line item in the budget.

But translations in the action genre still demand particular attention to detail on the part of the localizer. One of the first things to do is create a term base. That will help translators keep all the different weapon types and character classes straight. And to make sure we avoid the mistakes that annoy veteran players the most, we often bring in consultants or reach out to the source if the game is based on a book or movie. Otherwise, the whole team will be lost trying to figure out how an extended magazine differs from a double magazine or how a light stock differs from a tactical stock.

When we were localizing the action slasher MORDHAU by Triternion, for example (which includes more than four hundred types of clothing and armor, not to mention another hundred of different weapons), our translators and editors had to dig through specialized encyclopedias to find the difference between basket and cup guards, see what cuirasses and buffs look like, and understand the different types of halberds they had in the Middle Ages.

But not all action games focus on the physical side of the gameplay. Some boast an engaging storyline, gripping dialog, attention-grabbing details, and even a well-developed world. Take Anthem by Electronic Arts. We came up with something completely new: adorable Grabbits, something like rabbits, needed a made-up word in Russian, and the same went for a faction of scientists and researchers called Arcanists.

Games in this genre have players thinking strategically, as there are a variety of game realities they have to control at the same time. The same goes for localization managers — they have to dive deeply into the functionality of the game world. Are gold and coins the same resource? What’s the difference between peasants and laborers? Localizers always try to immerse themselves in the game atmosphere to better understand the context.

When you’re working on a strategy title, you need as much information about the game as possible: screenshots, pictures of buildings and items, location maps, and much more. All that is crucial for a high-quality translation of any strategy game, although it never hurts to have background information for other game genres either.

It’s also important to ensure consistent capitalization, where objects and units are capitalized the same way when they’re the same type. For example, you can’t have the lowercase “mill” next to the capitalized “Smithy.” Your army can’t feature “English Archers” (both words capitalized), “Deadeye marksmen” (one word capitalized), and “sly crossbowmen” (lowercase).

Whether it’s a simulator or a strategy game, the key to sports is getting the terminology right. We often have to pull up information from official sources or even bring in experts to review translations in order to make sure we’re on the money with rules, equipment, and brands.

Many consider this genre one of the most engaging, as it instantly turns players into robbers, knights, healers, and mages. Localizers also have a special place in their heart for RPG projects. And that’s mostly because of the mountains of text. Working on translations of that scale is so challenging that it requires close coordination between the entire team, making it a linguistic RPG in its own right.

Because there’s so much text and so little time, we bring in multiple linguists, which necessitates a top-notch glossary and excellent editors.
The team has to understand the ins and outs of the storyline, the relationships between the characters, how those relationships progress with time, and all the different alternative plot developments.

Plus, with all the characters RPGs have, they might all feature their own speech patterns. One uses complex phrases and a rich vocabulary, another leans heavily on sarcasm, and a third has a lisp. And all of that has to make it into the translation.

One more peculiarity of RPG games is all the different made-up realities (place names, legends, and different races). Everything has to be adapted to the target language, sometimes carrying over a play on words, and elsewhere simply transliterating.

For example, for Tales of Berseria by BANDAI NAMCO we built a team of editors who had worked on Tales of Zestiria, the previous entry in the series, or specialized in Japanese, the language of the original. They were all only too happy to dig through the reference materials the developer sent us. Once we’d figured out the order of the different dialogs, we were able to follow the string IDs to identify the speakers and make sure we were maintaining their particular quirks. The game tone was fairly serious, which made jokes about touchy topics a significant challenge for the translators and editors working on the project.

Another engaging and therefore globally popular gaming genre is quests. The storyline is built around a trip to a particular goal. For quests, translators need to maintain the atmosphere, avoid getting tripped up by the complicated storyline and dialog, and correctly adapt the puzzles the developers came up with. Sometimes that means stepping outside the realm of localization and resorting to cultural adaptation — a Russian player, for example, would never think to look for medicine at a supermarket instead of a pharmacy.

If the game plays out in a complicated context, localizing the quest can be a major challenge for the whole team. That was what happened for Valiant Hearts: The Great War. Not limiting ourselves to just watching a string of movies about World War I, we also brought in a historian specializing in that period and a linguist with historical training, all to ensure we correctly localized what turned out to be a hugely entertaining quest.

Puzzle games don’t tend to be very complicated, and the same holds true for localizing them. Once you’ve built a glossary and mastered a simple, concise writing style, the rest is easy.

But the problem is that it isn’t as easy to attract players as it once was, and that means developers have been adding a plot. That’s what really needs to be translated well. In Lily’s Garden by Tactile Games, for instance, players have plenty to do besides worry about the puzzles: the plot twists and interaction between the characters is enough to keep anyone entertained. There are also plenty of jokes and cultural references that made translating the game interesting and difficult at the same time. For quite a few songs the main characters sang, we switched them out for Russian options — Green Icy Mountain turned into couplets from well-known Russian songs for the main character, and his daughter quoted Noize MC, a popular Russian artist, instead of Limp Bizkit.

Sometimes you have to go beyond translating the whole story and adapt it to the culture of the target country in line with age restrictions, given that adults and children alike enjoy solving puzzles. Once, we talked with a developer and recommended replacing a love story between two characters with a simple friendship, otherwise, an adorable match-three game with a 0+ rating would have been banned in Russia for promoting non-traditional sexual orientations.

There are, of course, lots of different puzzle types, and each has its own nuances. For example, translators working in the hidden objects subgenre can’t get by without visual references to make sure they’re not sending players off on wild goose chases with words that have multiple meanings.

In lieu of a conclusion

It’s hard to argue with the fact that the game genre matters to the localization. Even without the nuances we’ve discussed that are involved in project planning, there’s also the staffing issue. Boosting translation quality and speed means attracting linguists who have experience working in the relevant genre, preferably in addition to extensive gaming experience. But needless to say, that isn’t always a possibility, in particular when we’re talking about a rare subgenre. In this case, an experienced editor can save the day by clearing any potential errors out of the translation. Nothing should get in the way of players enjoying the game.

Basically, game localization is a large, hugely important process for localizers and developers alike. Building a friendly, productive relationship between those two sides is the key to delivering great localizations and releasing successful new titles.