World War I is not the most common setting in modern Russian culture, so the project team’s members began preparations long before the project launched. In addition to translating the game’s text, which included soldiers’ letters and an encyclopedia, we needed to test the localization on mobile platforms. Also, besides directing the game voiceover process, Ubisoft asked us to help select voice actors.

The project took 5 months and was released on multiple platforms (PC, Xbox 360, Xbox One, PS3, PS4, iOS, and Android).

Our preparations for the project began long before the developer sent us the files for the job. Along with a description of the project, Ubisoft sent us a list of the books and movies that inspired the game’s creators. The project manager and editorial staff watched several films about World War I to gain knowledge about and inspiration from its history: A Very Long Engagement (2004), Paths of Glory (1957), and Merry Christmas (2005). A consulting World War I historian joined the team, along with a translator with an education in history.

The project was translated by Dmitriy Usov, edited by Daria Serebryakova, and managed by Marina Ilyinykh.

To ensure the accuracy of the historical facts and good interpolation of facts about Russia into the wiki, we consulted with several historians. Ubisoft had developed an internal encyclopedia which contained interesting facts about France, in particular details about the French railroad and mechanical engineering. Our work required us to adapt this supporting material, in part by rewriting all the articles to include information about Russia during that time period. Also, by working with a consultant, we managed to avoid distorting historical facts and consistently used the terminology preferred by historians of that time period. The search for our consultant took about a week. We first looked in the universities in the Samara region, but we failed to find a specialist with deep knowledge of such a narrow field. Soon afterward, we communicated with a professor from Moscow’s Higher School of Economics, and she put us in contact with the World War I specialist we needed.

The developer was also very serious about the voiceover work. When selecting each voice actor, we did not rely on the voice of the English actor for our decision but tried to select a voice that best reflected the characteristics of the game’s historical era and best immersed the player in the game’s events. One of the customer’s requirements was a “good manly voice” for the lead role. Therefore, we decided to work with the well-known voice actor Andrey Yaroslavtsev (who voices Optimus Prime, for example).

About this, I have to say that I’m really proud of the final product.
I know I pushed you to do more than the usual localization, especially with the adaptation of the wiki.
The wiki turned out to be really a plus and a key selling point to the game (which wasn’t expected at the start even in my wildest dreams) but because of all the attention, energy and care that you and your team put into them I have to say that the result is great, and it shows in the feedback from the gamers but also from the newspapers. By the way I did an interview explaining the research that was made and the adaptation work that was requested by the translators, but I’m not sure if this will see the daylight, if it does I’ll make sure to share it with you J
From what is obvious and what I could understand from forums your work on audio is also amazing, so for all this a huge and gigantic thank you.

I hope this game does well and if it does (it seems to start well in Russia and not just because of the steam incident) remember that it’s also because of you.

“An adventure that is touching, interesting, and beautiful in every way, tainted only slightly by monotonous gameplay and an unlikely antagonist. This is an almost perfect way to teach a young person about the war.” – Riot Pixels.

“Sometimes Ubisoft takes excursions away from its huge AAA series, and more often than not the results of these experiments exceed all expectations. With its gorgeous visuals, its beautiful soundtrack, and its touching story, Valiant Hearts is not only a reminder of the First World War but also itself an experience you are unlikely to ever forget.” – Kanobu.

Players liked both the voiceover work and the localization:

“Overall, this game is like a small history textbook. An off-screen narrator (the localization is praiseworthy, too – it’s very good) relates and explains events, twists of fate, and battles and their outcomes. Almost every mission contains photographs and facts from the war. – NeroHelp.

“Besides its other strong points, the game is also extremely informative, presenting historical facts in an accessible way. Even the localization is work of the highest quality.” – Thundervision. 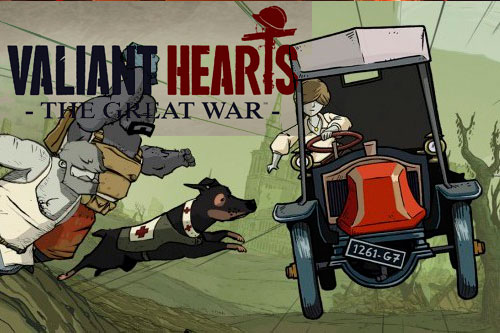