Game Localization: The Crew 2 by Ubisoft 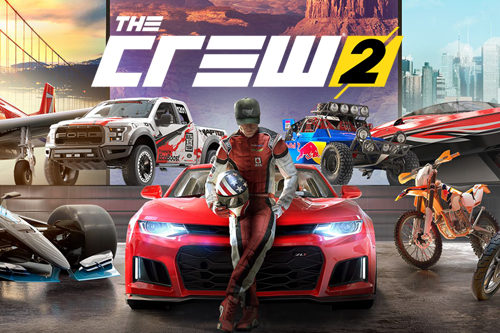 Timeframe: from August 2017 to present.

The Crew 2 is the sequel to the popular arcade racing game. One of the series’ main features is the ability to play in an open, seamless world with your friends or a group of random players. The vehicle selection in the first game was limited to cars and motorcycles, but the lineup in the new one has expanded to include powerboats, planes, hovercraft, and even a helicopter! You can even instantly switch between them—something never before seen in a racing game! It’s no wonder that exploring the sweeping expanses of the USA has become even more exciting. What’s most important is that the developers have no intention of stopping here: every two weeks new vehicles are added to the game. To the delight of fans, every three to four months, the developers release large—and best of all, free—major updates, with new disciplines, events, and activities. For example, with the release of Gator Rush, a new storyline appeared in the Offroad family, and in Demolition Derby, the players got their long-awaited PvP mode and the chance to put themselves to the test in demolition derbies. Hot Shots, another major update, is just around the corner. It will also treat the players to new competitions and customization items for their vehicles.

Localization work on the game began in August 2017. We have an extensive translation memory from the previous title of The Crew franchise, which somewhat simplified the process, but the glossary had to be thoroughly reworked on account of the project’s new requirements and terminology. The arrival of new types of vehicles also gave rise to not only highly specific terms but also new mechanics and tech features that needed to be explained simply and clearly to the players. To do this, we needed to understand these intricacies for ourselves. For example, the text is explaining why jetsprint boats should be flat-bottomed and have no propeller. This way, they can negotiate swampy areas and even small pieces of land, allowing them to cut a path and set a new record.

One of the requirements of the project was to leave the names of the in-game disciplines, families, and vehicle categories in English. As far as the interface and texts go, this didn’t cause any serious problems, since we could substitute a generic word in Russian. For example, Street Race event was translated as “событие Street Race,” Offroad became “группа Offroad,” and so on. While translating the photo quests, strict string limits were added to the requirements, but our imagination came through and we managed to convey the original message concisely, never forgetting the customer’s wishes and linguistic norms. So, the quest “Bring your lil’ MONSTER TRUCK to Los Angeles’s Convention Center” was translated as “Подъедьте на своем маленьком монстре для MONSTER TRUCK прямо к конференц-центру в Лос-Анджелесе”. We tried to save the wordplay for MONSTER TRUCK here since we weren’t allowed to translate the vehicle categories. However, tricks like this are awkward in dialogues, making the character’s speech sound unnatural. Besides, the wordplay in many strings can simply be lost. For instance, the phrase “This Demolition Derby is living up to its name” sounds in Russian like “Demolition Derby оправдывает свое название”. This is the literal translation and it wouldn’t have been clear to the players who are less proficient in English. So we had to find another solution. We adapted the phrase like this: “Гонка на выживание оправдывает свое название” to make it sound fluent and clear for all the players.

In addition to localizing texts, we did a lot of work to voice-over dialogues and individual lines. Compared to the previous game, The Crew 2 has a bunch of new characters because of its four storylines, one for each family: Street Race, Pro Race, Offroad, and Freestyle. In each storyline, the player has a mentor and a major opponent, with whom all the interactions take place. All characters have different personalities, habits, and style, so it was very important to convey all these features in the Russian dubbing. Particularly revealing is the communication between Emmett, the “Grumpy”, and Sophia, the sassy wild child that can’t live without extreme and insane races. Their personalities are polar opposites, but they are best friends. Since updates continue to roll out, it’s important to plan the sessions wisely, so that all actors can participate. Of course, in the event of an emergency, there are stand-in actors, but we managed to record all the lines with one team without their help.

Ubisoft Entertainment (previously Ubi Soft) is a company that specializes in publishing and developing video games. Their central office is in Montreuil, France. The company has studios in over 20 countries, including Russia, Canada, Spain, China, the USA, Germany, Bulgaria, Ukraine, Romania, and Italy. Ubisoft is one of the largest game publishers in Europe.