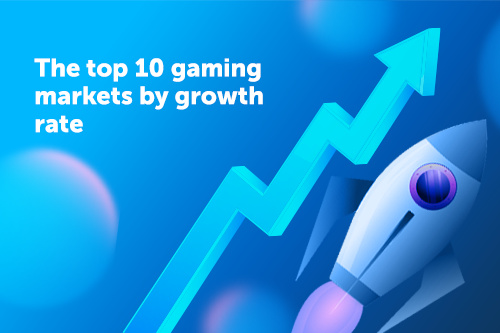 The U.S. and China are major global markets that account for almost 50% of the gaming industry’s revenue. However, their explosive growth has already come and gone. Therefore, we have decided to examine the markets that are showing the greatest revenue growth as of 2021.

Interestingly, India did not take first place in terms of growth rate, while out-of-the-way countries like Ethiopia and Guatemala occupied some of the top spots.

According to data from Newzoo, the total value of the games market amounted to $159.3 billion in 2020.

Thus, the 10 fastest growing markets account for only 2.73% of overall revenue. We should also note that of these ten markets, only the following three can be considered large enough to pay close attention to:

The internet (including mobile connectivity) is just beginning to develop in Cuba and only arrived in the country in 2018. Coverage and speed currently leave much to be desired. However, according to Cuba’s sole internet provider, ETECSA, mobile traffic tripled in 2020, which led to an increase in revenue for the gaming industry.

India has witnessed a dramatic leap in the accessibility of mobile internet in recent years. In five years, overall traffic increased sixtyfold and the price of one gigabyte of data decreased by 10 times. Today, 4G networks cover 99% of the country’s territory. This was possible thanks to the telecom giant Joi.

Along with mobile internet, Joi enabled the population to access low-cost smartphones, sales of which are growing annually by 15%. Furthermore, the median age in India is 29 years old, meaning that young people compose a significant share of mobile users. Thus, India’s gaming industry is growing mainly thanks to mobile games (economictimes.indiatimes.com, businessinsider.in).

Ethiopia’s overall economic growth most likely has a positive impact on the gaming industry there. Ethiopia has been growing rapidly in recent decades. GDP is increasing and poverty is decreasing; accordingly, the population’s ability to pay for goods is also growing.

In addition, the country’s telecommunications market, previously monopolized by the state, has recently opened to private companies. As a result, internet prices have become more affordable for the population (innovasjonnorge.no, expogr.com).

The primary force driving the growth of the gaming industry in Guatemala is most likely the severe restrictions associated with the COVID-19 pandemic, including the country’s curfew and restrictions on travel outside one’s home. Given these circumstances, Guatemalans spent part of their spare time and money on games. Traffic from mobile devices and tablets increased by 40% (datareportal.com).

The primary reason for the game market’s growth in most Latin American countries is the continued development of the internet in conjunction with the impact of the COVID-19 pandemic. Average connection speed and traffic grew by 150% (fairinternetreport.com, datareportal.com).

As was the case for the aforementioned countries, the COVID-19 pandemic was the primary driver of the popularity of mobile games in Costa Rica.

The gaming industry’s growth in the Philippines is driven by two key factors: the growth of mobile networks due to the launch of 5G and state support. The gaming industry is regarded as one of the key sectors of the Philippine economy. The country even has a program aimed at promoting esports and integrating it into school education.

It also has a national esports league as well as many collegiate and school leagues (esports.inquirer.net). These practices attract new talents to the industry and enables its development.

Here too industry growth was largely caused by restrictions related to the COVID-19 pandemic.

Given these circumstances, Dominicans spent part of their spare time and money on games. Traffic from mobile devices and tablets increased by 80% (datareportal.com, garda.com).

The situation is similar in Uruguay. A significant percentage increase is due to COVID-related restrictions. State support is another stimulant. The government organizes conferences for developers and creates business incubators (uruguayxxi.gub.uy).

The Saudi government, which actively promotes the gaming industry, plays an important role by sponsoring professional esports athletes and backing the construction of esports stadiums and gaming cafes.