Why Doesn’t Localization Pay for Itself? 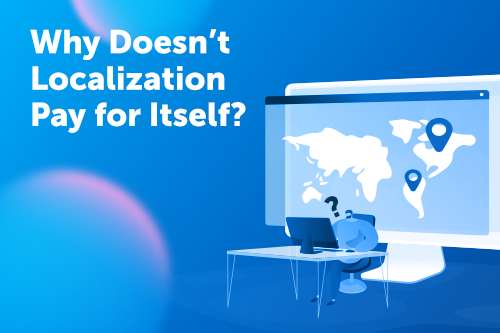 Let’s start by defining what game localization is.

Game localization is the translation of in-game texts, interfaces, marketing materials, and other texts aimed at successfully rolling a product out to a foreign market. Localization can also include adapting content to legal requirements and the cultural realities of the target country.

You’ve made a dream come true for many by coming up with a game that’s bringing in a solid revenue stream. But you don’t want to leave it as is since sitting on your laurels is boring. You want new challenges, new revenue streams. Finally, you decide that the rest of the world shouldn’t have to live without your game. Now that your neighbors know about it, it’s time to introduce it to the kind of people you need a passport to visit. It’s going to be played day after day by a Japanese schoolgirl, a French waiter, and a Brazilian football player.

As time goes by, however, you can’t help being disappointed by the lackluster earnings that aren’t coming close to justifying your investments. You spent too much on localization, promotion, and your emotional well-being to have it end like this.

But what could be the reason your localization isn’t paying for itself?

There are actually two big ones:

1. You didn’t spend enough time getting to know the market you wanted to enter.
2. Your game localization is no good.

It’s one, the other, or both. But let’s skip the drama and dig in.

Isn’t the fact that your game is amazing enough for it to earn money outside your home country?

Unfortunately, it isn’t. The bigger the cultural differences, gaming culture included, the more time you need to take studying the market and adapting text to it. Sometimes we get so blinded by greed that we forget about what might seem obvious. If players log into your game through Facebook or Google+, you can write off China no matter how good your translation is. And once you figured out authorization, Chinese players started using some very bad words to describe you—your game has samurai learning their art right under Sakura (Chinese people and Japanese people don’t like each other very much for historical reasons.

Okay, there was a little drama in there. But there really are going to be problems when you move into China. Not only do you have to squeeze into the local marketplaces; one small step to the left or the right, and your game and everything you invested in it will be banned in the country. Think back to the story of Football Manager in 2005. The game featured both Taiwan and Tibet as separate countries, and the Chinese government didn’t like that. As the developers wanted to make sure nobody could accuse them of encroaching on territorial integrity claims, the developers had to quickly release a new version of the game where Taiwan and Tibet were both part of China.

Particular attention should be paid to in-game text that is not translated into Chinese. According to some data, Chinese developers aren’t permitted to use words in English or other languages due to some new laws (it’s not completely like that, though that’s how the laws are being interpreted), otherwise their games will be banned in China. And if all that isn’t enough to scare you, don’t forget to read our article about China here.

But let’s talk about more prosaic, less obvious problems. We’ll say you have a great match-3 game about candy for kids. As you try to promote it in wealthy European countries, you’ll notice that German and Swedish adults, the ones with the money, aren’t letting their kids play it. They don’t like the text flashing across the screen about how great candy is. The translator tried to bring the text closer to the original, while asking them to do the opposite would have let you make a few changes to the text that would have European parents feeling better.

Potential markets need to be researched in terms of both how many people there are living there and how many can pay for your game. As you were dumping money into the localization, you didn’t stop to realize that your players are flat broke. Yes, there are 1.4 billion people in India. But how many of those people have the money to pay for a game? No matter how great it is. And if they are willing to pay, are they up for the same price you’re offering Europeans, the one that means your localization will pay off? Or is it going to be much lower? For example, Indians spend $2.37 on mobile games every year, while Japanese people spend $89.88. You can read more on our blog.

You decided to make your move and translate into Spanish or Portuguese in the hopes that millions of people overseas will buy in. But if you just went for the closer European variant, lower your expectations. Those people overseas may not like it. There’s no such thing as neutral Portuguese, not with differences in grammar, writing, and vocabulary. Imagine that you, a Russian, get your hands on a game that purports to be localized just for you. And who cares that there are some Ukrainian words in there? You get the general idea!

Also remember that people in South America are well-versed in piracy.

You localized your not-quite-a-clone of Pokémon GO into Japanese, only you’re surprised to find that Japanese people themselves, who love the original, aren’t willing to pay up.

Your game just doesn’t have that flair. The font you picked doesn’t work with Japanese characters. You didn’t think about how to mirror buttons in Hebrew. Long German words didn’t fit in the interface, making it impossible for anyone except true fanatics of the game. Well, hey, not a bad way to filter out most of your gamers. But it’s not going to earn you money.

You thought of everything, from A to Z. Nothing and nobody, be it federal law or enraged parents, is going to keep you from getting German kids hooked on your creation. Your interface looks great with the new language. The subtitles are all crystal clear.

But still, nobody wants to play since the game just wasn’t translated well. There are typos in the text that have your game community rolling on the floor. Some phrases don’t match what’s happening on the screen: while you meant “draw” as in a tie, a freelancer mindlessly translated it as “draw” in the artistic sense. Or, even worse, your translation is pulled word-for-word from the Russian, with English-speaking players not sure what “closed cards” your poker game is referring to when you actually mean “cards face down.”

We can think back to a recent example that will probably be canonized as an example of a stylistic faux pas: when God of War was localized, “boy” became “son” in Russian, though Kratos wasn’t supposed to call Atreus that until the last moments of the game. Ah, what a moment ruined.

HOW DO YOU AVOID ALL OF THAT?

First of all, don’t skimp. Translation isn’t cheap. Don’t hire shady characters with rates that are too good to be true. Instead, hire native speakers who work in the gaming industry. If you can’t find them yourself, check with an agency—they’ll definitely have some like that. Don’t forget to pay a native-speaking editor to review the text for mistakes since everybody makes them. If you really want to do it right, add a line item in the budget for localization testing, as that will rule out half the problems above.

Start by localizing into English. Finding native speakers who can translate from different language will be much harder, and top quality will be more expensive too.

Next, don’t be in a hurry, and don’t push. The best option is to have just one person translate the whole game so your detective doesn’t switch styles midway through. After that heroic translator, you need to have the text reviewed, which also takes time.

And talk more! The people you’re entrusting your localization to definitely know better than you which of the seven Korean levels of politeness works best for detective games, and which better suits match-3 games. They’ll help you write up the project specifications. When your translators ask you questions, be as thorough in your answers as possible, sharing the game build or at least screenshots no matter how secret the game is.

Yes, localization costs money. But a good job is worth it, turning that expense into an investment.