Six Reasons Why Your Playable Ads May Fail to Perform 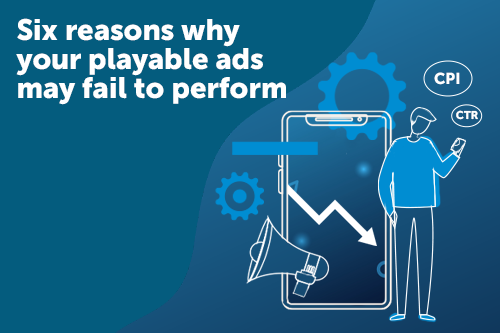 Do you have a great product and knowledge of your users, but your playable ads campaign has performed worse than your best video? Have you heard stories of UA budgets being wasted on playable ads, while static banners worked just as well?

In this 5-minute read, we’ll look at six details that can make your playable ad fly—or flop.

HTML5 playable ads are more expensive to make than PNGs, GIFs, or simple trailers based on in-app footage—sometimes 10 times more expensive! Still, there are numerous cases of playables yielding a 50% greater return on ad spending than video ads. Why does that happen? Playable ads are fully interactive. For apps and games products, this allows us to give the user a snippet of the actual experience, so you may get a lower CTR, but higher quality installs. For brands, this interactivity allows us to increase CTR, simply because people like playing games.

But here’s the catch: playable ads are a great advertising tool only when done right. And here are a few things that can ruin your playable ad creative—as well as your campaign budget.

Ideally, your playable should start with a visual hook. This might be a character walking into the scene, the camera panning, a close-up of an emotional face, or some other attention grabber.

If your intro is longer than two seconds, you risk losing the user’s attention. Besides, it drains time from free-play mode—you need your user to click that CTA button in less than 30 seconds after the ad pops up!

A tutorial that is presented as a separate screen

We’ve seen separate instruction screens explaining the goal and controls of the game. This prevents “learning by doing,” wastes precious time, and requires the user to perform additional actions (e.g., taps) to read and close the instructions. The best tutorials, on the other hand, are seamlessly integrated into the gameplay process.

An animated finger that mimics the desired action (e.g., tapping/swiping) and that is on loop until the user takes control is the best tutorial pointer. It should be high-contrast and reinforced with a concise text instruction (e.g., “tap to shoot”). Remember to show a new tutorial every time the user stops interacting with the ad for two seconds or more.

When a playable ad features multiple game mechanics, each one needs a tutorial of its own, otherwise the player will be easily confused. For example, moving a vehicle and damaging your opponents with the vehicle are two separate mechanics, but they are fused into a single gameplay loop. The tutorial might tell you to knock over your opponents but forget to teach you how to move, or vice versa. And even when done correctly, multiple tutorials will slow the pace of the game. So, as a rule of thumb, limit your ad to one game mechanic, and clearly show the player how their actions affect the game world.

We’ve come across playable ads plagued with tiny characters, distracting objects that turn out to be non-interactive, multiple text elements, a legacy UI with no function, and score counters that don’t affect the game outcome. All of these prevent a smooth game flow.

If you want to learn other best practices, Tim Shepherd of Wooga has published a useful presentation for game developers, while IAB has released a guide to playable ads for brands.