Game localization Trials of the blood dragon developed by Ubisoft

Timeframe: from February to June 2016

Trials of the Blood Dragon is the spin-off of a popular racing game series, styled like the action movies of the 1980s and 1990s. The children of Rex Power Colt have become cyber soldiers. They’ll have to race motorcycles, shoot, and visit different places, from the battlefields of Vietnam War 4 to outer space.

While working on the project, we referenced all the old action movies. The search for inspiration led us to re-watch many films from childhood, like Terminator, Commando, and Rambo. Fortunately, the translator working with us was the same one who had helped us localize a previous part of the game. However, the glossary had to be recreated since many new features appeared in Trials of the Blood Dragon.

There is profanity in the game. We sought to portray the emotions of the characters without being totally vulgar. We replaced many of the taboo words with less offensive synonyms or used asterisks in some of the strongest expressions. This is one of the few projects in which we allowed the use of expressions like “Drag your ass to Mars”, “See you in hell, suckers!” and “What the hell are saying?”.

The customer was pleased with the quality of localization, noting that we managed to convey the game’s humor and remain faithful to its mood.

This is a short email to let you know that I was very happy  to work with  All Correct Language Solutions translation and adaptation for Trials of Blood Dragon. They  did a great job and captured the humor and atmosphere of the game. They also have shown their understanding and modified the text file when it was needed in a very professional way. NB: Most changes added to the text files were small improvements made to avoid an ugly alignment (some sentences were too long) or to match better the audio. I hope that we’ll keep them close for next Ubisoft projects.

Ubisoft Entertainment (previously Ubi Soft) is a French company that specializes in publishing and developing video games. Their main office is in Montreuil, France. The company has studios in over 20 countries, among them Russia, Canada, Spain, China, the US, Germany, Bulgaria, Ukraine, Romania, and Italy. Ubisoft is one of the largest game publishers in Europe. 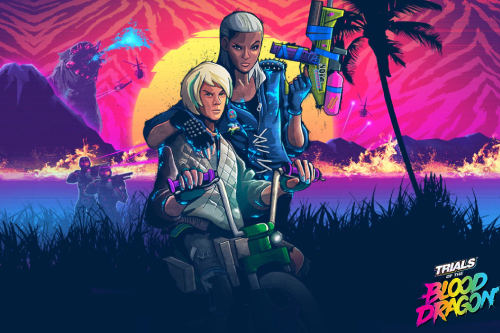