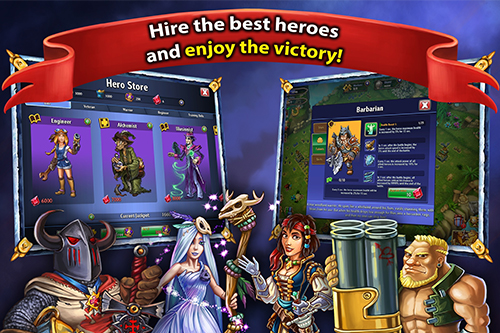 BreakingLands is a strategy game for players age 7+. Players find themselves on a deserted island. They must explore new land as well as fight for resources and learn to make profit under unfamiliar circumstances. This game is notable for its colorful graphics and humorous plot elements. The humor practically makes it a parody of “serious” strategy games. The game allows players to ally with friends and use an in-game chat.

Localization work for this application was done in two stages. First, the text was translated from Russian to English. Then it was translated into the other languages. Because the game’s age rating is 7+, special attention was paid to the translation of the terms and grammar constructions. This ensured that it remained age appropriate. Also, the translators played the game to preserve its feel. This helped them to successfully translate jokes and allusions. A detailed glossary was compiled to assure terminology consistency.

From its founding moment in 2011, the UFS Games team has always aspired to create unique games able to attract players from all over the world. Now the company consists of more than 30 people, all of them total fans of what they do. The company mission is to make interesting and top-of-the-line games.
Allcorrect
Allcorrect is a gaming service company. We help game developers free their time from routine processes in order to focus on key tasks. We provide professional game translations into 40+ languages and create game art of all levels of complexity. Also, we offer localization testing, voice-over, and culturalization adaption of in-game content. Our team adores games and complex projects. We’re incredibly proud of our clients, including both world-renowned AAA developers and indie companies that have successfully entered the international market.