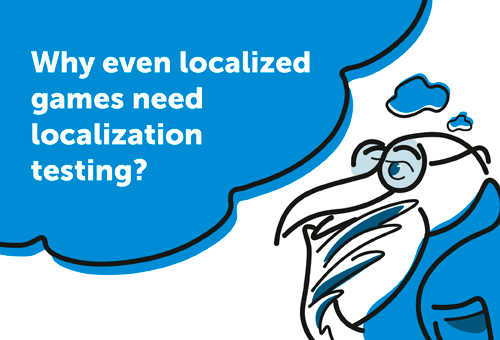 If you’ve ever been frustrated by an awful translation in a video game, such as when the text doesn’t match what’s actually happening on screen or the text is impossible to read in a bizarre and illegible font, then the game probably hasn’t undergone enough localization testing. If you’re still not sure what it’s for, let us show you the ins and outs.

Let’s say you’re a developer who wants to launch onto the market in other countries. To do so, your game needs to be in more languages than just English, despite how widespread it is. You’ve chosen a few languages and submitted localization orders. The company has met your deadlines, and you’re satisfied with the work done. But then the question arises: “How do I know that it has all been translated correctly? How do I know I’ve not just got a translation that will end up as a good source for memes?” This is where localization testing comes in, to help you monitor the accuracy of the translation and its adaptation for the player. You won’t end up with a situation where a small child will be playing a game about cute bears who talk like hardened criminals, for example (as translators often only see the text, but not the context supporting it in the game).

You’ve ascertained that your product is in line with cultural and age-appropriate requirements, and any other prerequisite. But we all know that there’s a human factor involved: our fingers can end up on the wrong side of the keyboard, and typos result. “But what about spellcheck?” you say. Spellcheck is undoubtedly a very convenient feature of modern software, since our eyes can begin to tire after just an hour of working. But spellcheck is still an unrefined tool, which cannot always recognize the sense of a phrase or correctly determine whether a specialist has indeed made a typo or a grammatical error. Sometimes, therefore, you need to check the text reviewed by editors, and localization testing can be of swift help to you in this regard.

Well, you’re happy that your text is perfect from the standpoint of grammar, stylistics, and other linguistic factors. But do you really think that those are all the possible pitfalls? We all know that the same word in different languages can have a different number of characters. Let’s say you want to translate “Knife” into Italian, and you get “Coltello.” But here’s the problem: the area that will display the word has space for a maximum of five characters, and as a result, the user just sees “Colte” (which is another word), or doesn’t see anything at all, since the word might simply not display due to the excessive number of characters. It is necessary not just to ensure that everything is correct and as intended, but to enable a player to become fully immersed in the atmosphere created, without sitting and guessing what the mysterious phrase “Find J” could mean. Therefore, testers also check for the presence/absence of text and whether it meets the established limits, as well as seek other types of cosmetic bug.

But let’s take a look at the game from a player’s perspective. You’ve just launched the game, which you bought for 50 bucks, you start playing, but you can’t get anywhere with it. And all because the quest says to collect a red carrot, but there are only blue ones around you. Or instead of carrots, there are only watermelons. As you’ve probably already guessed, localization testing helps to check this too.

Now let’s take a look at a less obvious detail. Despite the fact that everything in the game might be perfect and you can’t imagine how it could be better, you’re still getting negative feedback on it. You check the lockits, make sure the text corresponds to the images, but still something’s not quite right. The users can’t understand what the game “wants from them”, and demand a refund. Sometimes the problem lies in a font that doesn’t display properly. This kind of bug is particularly relevant for Asian languages.

So now, knowing a little more about some of the complexities that you might not have even thought about, you can easily avoid:

Looking back on everything we’ve just covered, we might reach the following conclusion: however brilliant your translation may be, it is always worth ensuring that it has been well incorporated into your game.