What’s the point of test tasks? 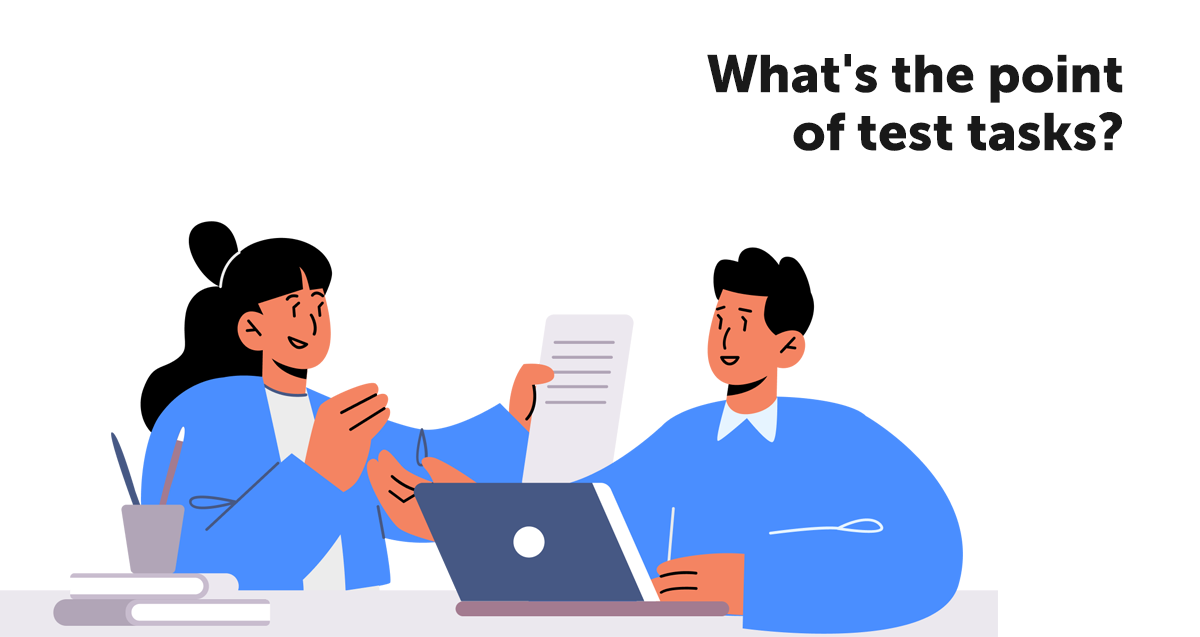 Let’s say you’re an ambitious linguist who doesn’t want to translate just anything—you want to work on games from internationally renowned developers. You respond to the job listing on our website, attach an incredible resume, and add a cover letter that tugs at the heartstrings. In reply, you get an equally touching email and… a test task.

Let’s just put it out there: nobody likes test tasks. They take a long time to make, no one ever has time to check them, and you have to do them for free. Even so, companies still send them to candidates time and time again. So, the question arises: por qué?
Let’s get to the bottom of this.

Why do companies send test tasks?

Candidates are sent test tasks for much the same reasons: if you’re looking for someone who can do a certain job, you need to see HOW they do the job.

A relevant degree is great. Work experience? Also great. Not having experience isn’t the end of the world. We’re opening our arms in a welcoming embrace, but we’re doing it slowly and cautiously. Sadly, neither the right educational background nor experience in the gaming industry is a guarantee that a specific linguist can handle the kinds of texts we work on. What if the person is used to translating adult visual novels, and when working on a project for children ages 3 and up they start using sentences like “He roughly ripped the sock from his foot, and she quivered in anticipation?” Or maybe they’ve spent 8 years translating projects for children, and so out of habit they use wording like “Pull the handle to make it go boom!” in a military simulator?

Test tasks aren’t as simple as they seem. They help us hide gold coins in an overgrown field and count how many of them our potential hire is able to see and pick up. Do they know how to work with tags and variables? Do they get types of quotation marks confused? Do they confuse imprudent with impudent? Do they switch tenses mid-sentence? Do they notice that the translation of a string should be 25 characters or less?

On top of all that, a well-completed test task helps give us an idea of a candidate’s perspective, the creative license they take when working with a text, their sense of humor and style, and the way they give and receive feedback. In other words, what will it be like for the team to work with the newest hire? Will comments from a new editor make poor, unfairly criticized translators burst into tears? (Or will the new translator’s clunky sentences make the poor editor mourn the death of grammar?)

The linguists who check the test tasks aren’t trying to sense people’s aura through the screen. But if someone puts “wtf were you thinking here?” in the comment column, you don’t need a fortune-teller to realize they aren’t going to give constructive feedback. Or if HR emails a candidate saying “Here’s a test task,” and they reply with “Are you out of your mind? A test task? I am a third-generation linguist! My great-grandfather taught Shakespeare how to write! You can take your test tasks and shove ’em!” Then there’s a good chance they aren’t great at feedback either. It’s probably not going to work out.

Sometimes test tasks weed out candidates before they even complete them. They might get the task, open it, and decide not to do it. Or they’ll start it but give up halfway through. In that case, it’s likely the candidate isn’t a good fit for video game localization, or for our projects in particular. Of course, it’s hard for us to believe anyone wouldn’t be interested in our projects, but anything is possible. It’s best to find that out right away and save each other a lot of time and nerves.

Sure, but why should candidates care about test tasks?

As a way to test yourself! To set foot on linguistic terra incognita, and once you’ve crossed the uncharted territory, to turn and cast a victorious look over the trail you blazed through it! And to get invited for an interview.

Test tasks are a great way to figure out if you’ll enjoy working for a company. The tasks we send to candidates are usually very similar to the kind of things we do every day while working on projects. So, if you find it unbearable to spend a few hours on a test task, think hard: would you really enjoy spending every working day, all year round on this kind of thing? If no, then fly, you fools! If yes, then stick around, you fools, and make yourself at home.

A test task is like a job interview with yourself before you interview with the team lead. Does this interest me? Do I like this? Can I do this? Do I want to dive deeper into the task and look for interesting alternatives? Does this style of text suit me? Was the task explained well to me? Was I able to ask for clarification on things that confused me, or was I just thrown into a stupid field in a forest full of coins, and I have no idea if I’m supposed to pick them up or leave them, and there’s nobody around to ask? How long do I have to submit the task? How am I using the time? When’s lunch? Who am I? Why am I here?

Yes, the only profit you’ll make by completing test tasks is a chance to make it to the next stage of candidate selection and maybe a little bit of self-satisfaction. Companies don’t earn a cent from test tasks either, you know, despite the common myth that they try to pass off real orders as test tasks. That would be both dishonest and simply too risky.

The company only has a limited amount of time to complete each order. It would be ridiculous to give an urgent and important task to someone whose skills we aren’t sure of. If you don’t know the specifics of a project, it’s possible to make such egregious mistakes that no one will ever accept the work. So, we only assign actual employees of the company to spend time working on tasks from clients. We also spend time creating and checking test tasks.

Our most detail-oriented linguists specially craft test tasks that are like patchwork quilts, made up of the most interesting parts of all of our projects. And we update them from time to time to give a second chance to candidates who tried to join the team in the past, but lacked the necessary experience and skills at the time. All of this effort, just to find new players for our team of video game localizers. So, if you’ve been hoping to join the Allcorrect team or if you tried before but weren’t successful—step right up. If there are no open positions on our website, email us at hr@allcorrect.ru. You’ll receive a form to fill out, and then you get… that’s right, a test task.

Interested in translating games and not afraid of hard work? Welcome! Our field of gold coins is open year-round.