The Gaming Market in Japan

Japan (Japanese: 日本 Nihon, Nippon, lit. “Land of the Rising Sun”), officially known as the State of Japan (Japanese 日本国 Nihon-koku, Nippon-koku), is an island nation in East Asia. It is located in the Pacific Ocean to the east of the Sea of Japan, China, North and South Korea, and Russia. It extends from the Sea of Okhotsk to the north to the East China Sea and Taiwan to the south. Japan is located in the Japanese archipelago, which, according to official government reports, is made up of 6,852 islands. Japan is third in the world in terms of nominal GDP and fourth in terms of GDP adjusted for purchasing power parity.
Japan is a developed country with a very high standard of living (19th in the Human Development Index). The country has one of the highest life expectancies (85.3 years in 2017) and one of the lowest infant mortality rates in the world. 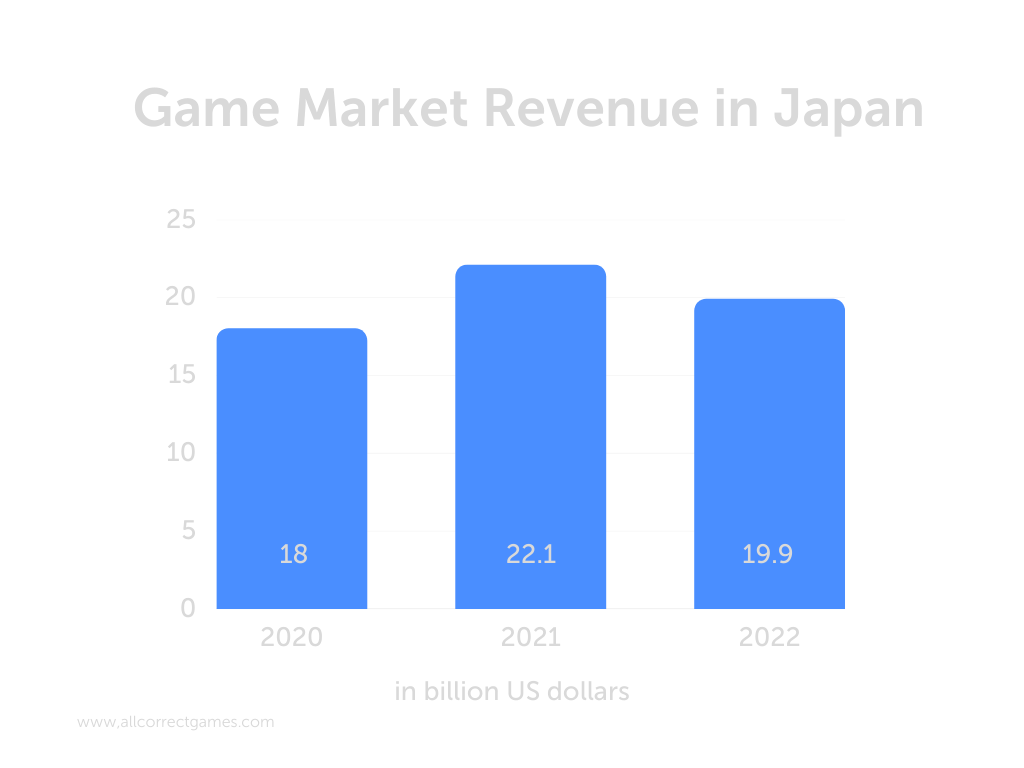 Games in Japan are characterized by a specific visual style and local content characteristics, which have led to the creation of a unique but enormous video gaming industry. Japan is a developed market for all gaming platforms: PC, mobile devices, and consoles. Console games are particularly important relative to other Asian digital gaming markets, as the headquarters of major console manufacturers (Sony, Nintendo, and Sega) are located in Japan. Console games have always been popular with Japanese gamers, but in recent years, trends have been shifting towards mobile games. Currently, mobile devices are the biggest gaming platform in Japan in terms of revenue and number of players. Consoles and PC games trail behind mobile games in both categories.

The coronavirus pandemic had a positive effect on the mobile gaming market: in 2021, the number of sessions increased by 22% compared with the same period in the previous year. However, this statistic returned to normal by 2022, with the number of sessions only showing an 8% growth over pre-pandemic figures.
Hypercasual games dominate in terms of number of downloads: 15% of all downloads are games in this genre, followed by RPGs at 13% and puzzles at 12%.

The Japanese Mobile Content Forum (MCF) reports that the market value for mobile games in Japan reached the equivalent of 12 billion USD in 2021. The growth rate was not as high as in the previous year, likely due to decreased effects of the coronavirus pandemic.

Nintendo and Sony lead the market for gaming equipment / consoles.

Aside from these two equipment manufacturers, Japan is the homeland of numerous international developers of gaming software, including Bandai Namco, Square Enix, Konami, Capcom and Sega.

Current Japanese legislation makes development of esports difficult in some ways. Firstly, copyright law designates esports as “cinematographic works” or “works of computer programming.” Broadcasting competitions for wider audiences, sharing them on the internet, and recording them for secondary distribution all raise questions of copyright violation. Secondly, esports could be considered a type of gambling, which is prohibited in Japan.

Despite the legal issues with hosting esports competitions, esports remains an actively-developing and promising sphere.

Japan has one of the highest numbers of players in the world: 58% of the population. Of this, the largest segment is mobile game users: 41%. Among mobile gamers, the number of males is slightly higher than the number of women, especially in the 15–44 age group. 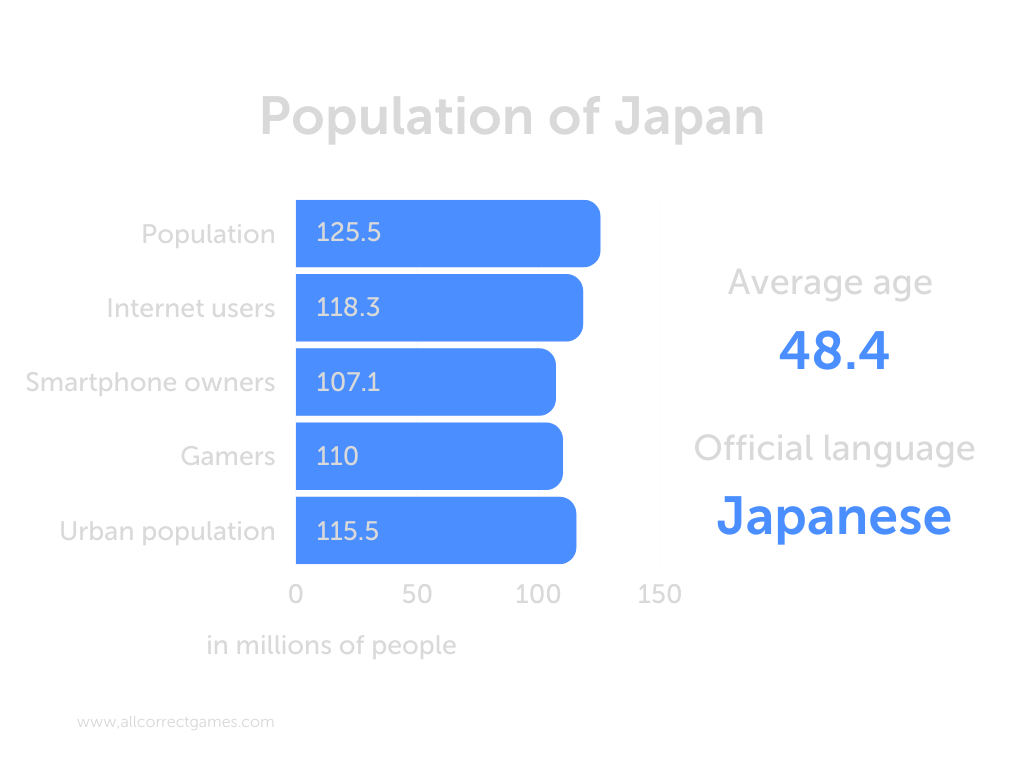 Around 70% of smartphone owners play mobile games every day, and almost 95% play at least once a week. The frequency of smartphone gaming by Japanese users is high compared to world statistics.

The majority of mobile gamers come from the younger age range (from 15 to 40). Consoles are most popular with the 29–49 age group, and PC gaming with people aged 50–64. 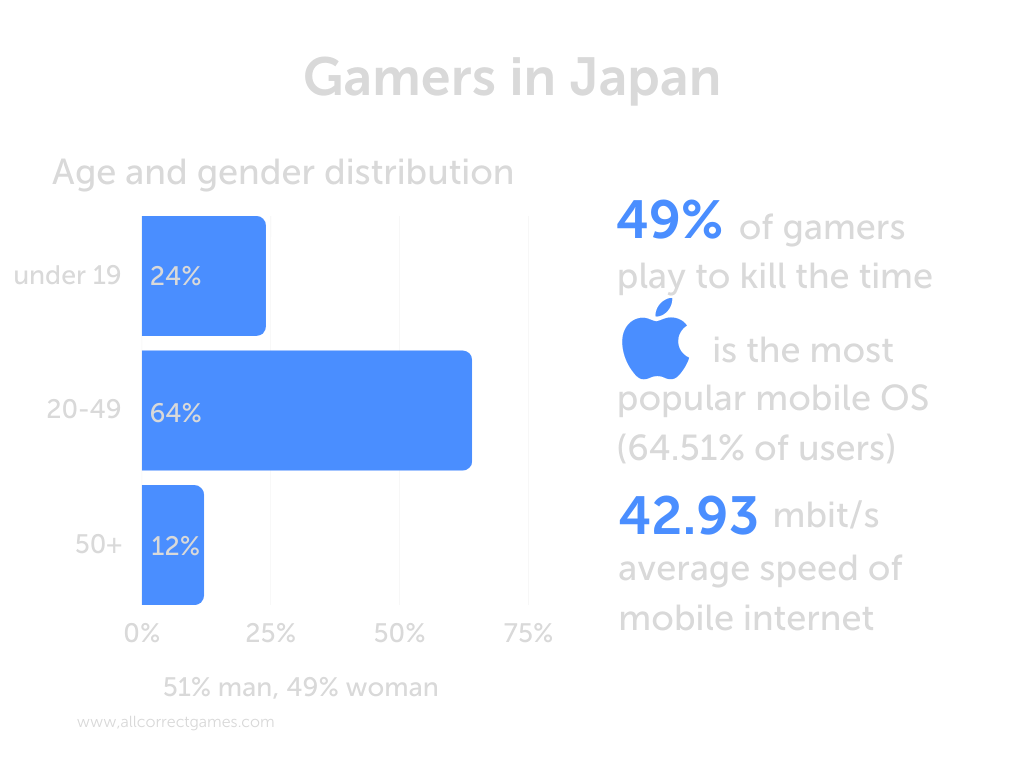 Japanese mobile gamers take their online gaming very seriously. According to GMO Research, 61% of surveyed gamers admitted to paying for mobile games or making in-app purchases. The majority of players who make in-game purchases are men.

50% of Japanese gamers see games as a way to relax and have fun. While this is a high percentage, it is significantly lower than the worldwide average (63%).

49% of Japanese gamers see games as a way to fill time, which is also lower than the worldwide average (55%).

45% of Japanese gamers see games as a way to immerse themselves in game worlds (compared to 38% worldwide).

9% see games as a way to be part of a team and achieve mutual goals (compared to 17% worldwide).

Localization and culturalization for the Japanese market

Japan has a low rate of English proficiency: less than 30% of the population can speak English, and less than 10% can speak it fluently. This is despite the fact that English is widely taught for years in schools.

According to the EF English Proficiency Index (EF EPI), Japan ranks 80th in the world in terms of English proficiency, which is quite low. 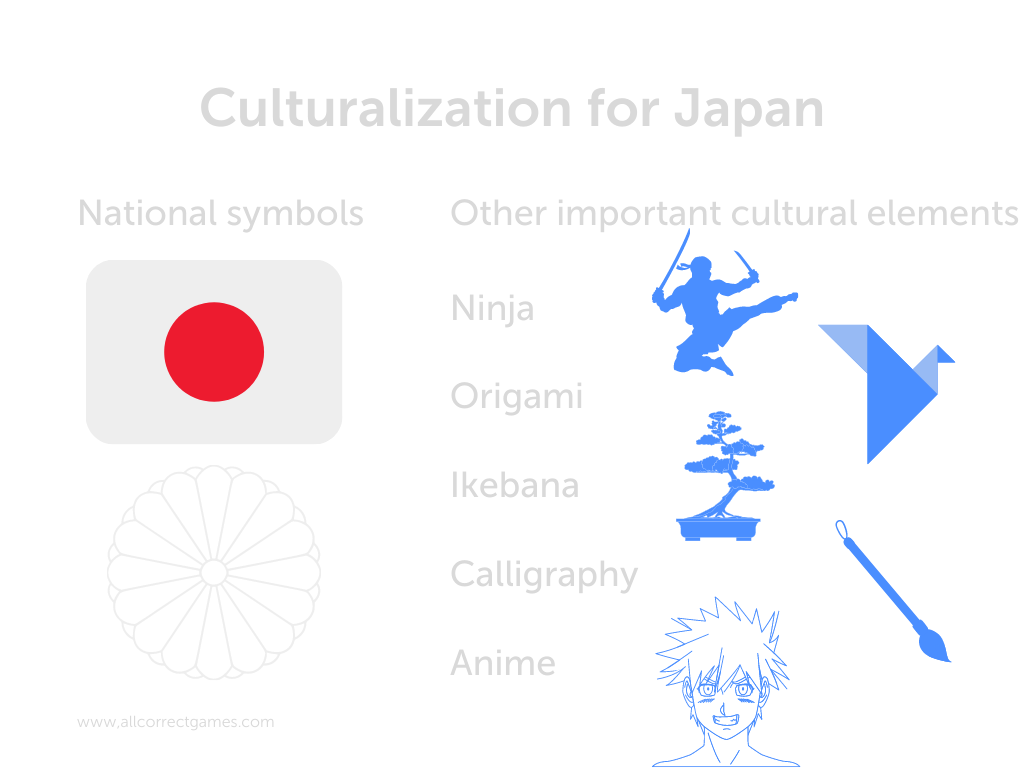 Such statistics reinforce the need to localize foreign games.
The main consideration when localizing games in Japan is the need to adapt the content, not just translate it. Cultural requirements and norms must be considered. 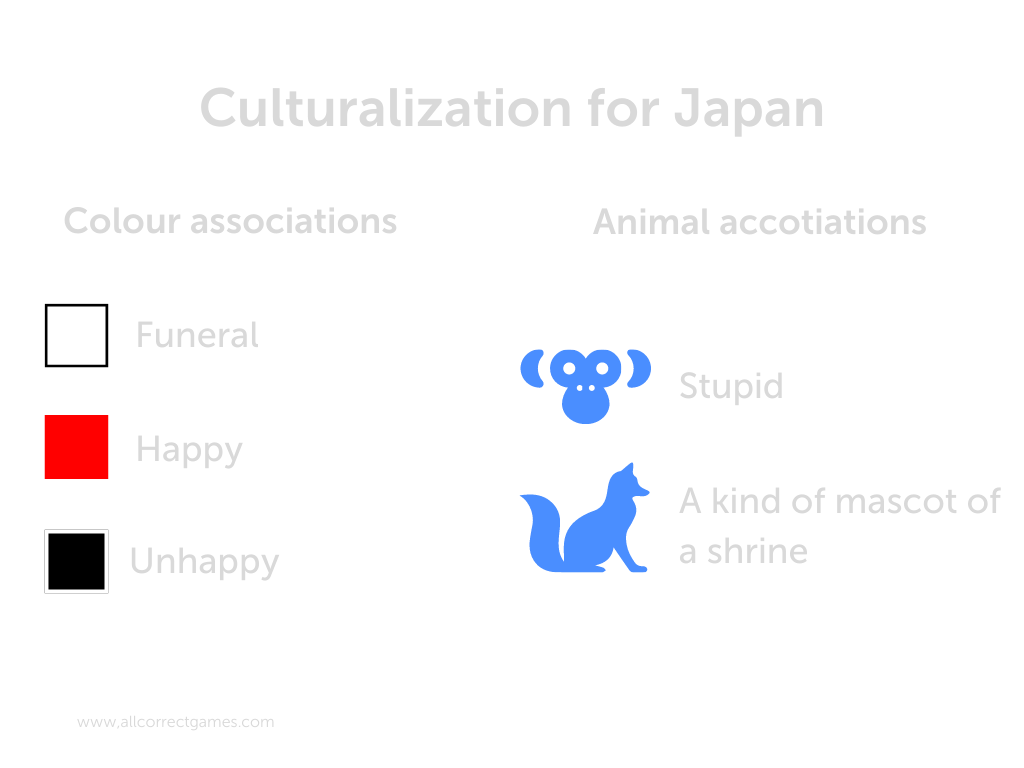 Japanese has several writing systems (kanji, hiragana, katakana, and romaji) and two computer input methods, which makes it quite a tricky language right from the start. In addition, Japanese words often change, and the official writing systems, kanji and kana, as well as some linguistic forms, are reviewed annually by the Japanese Ministry of Education.

Japanese is an extremely rigid language. It has different levels of politeness that depend on the hierarchical status of the person you are speaking with, their relationship to you, their social status, and more. The so-called “neutral” level of Japanese can sound very polite and sterile.

Japanese has strict requirements for the tones that men and women speak in.

You must avoid religious topics, as well as promoting any tobacco products, drugs, etc. in games.

Symbols and colors are very important in Japan. For example, the number four (4) means death.

Although games are rarely banned in Japan, they do undergo censorship. Scenes depicting violence or nudity are prohibited.