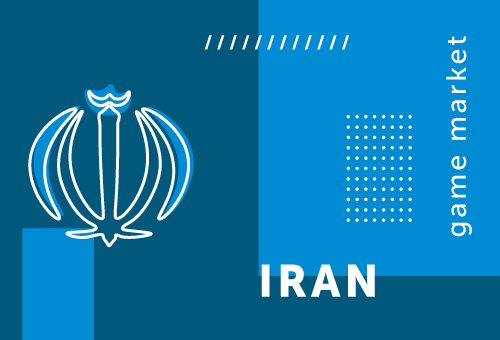 Official name: The Islamic Republic of Iran (Persia until 1935)

Iran is the most populous country in the Middle East and has the fourth-largest GDP in the Islamic world. The total volume of the Iranian games market was USD 602 million in 2018. Of this, USD 308.3 million (57%) belongs to the mobile sector, while the rest goes to client- and browser-based PC games. The analysts at Statista have predicted that it will reach USD 570 million in 2019 and USD 643 million by 2023. The primary driver of this growth will be mobile games. 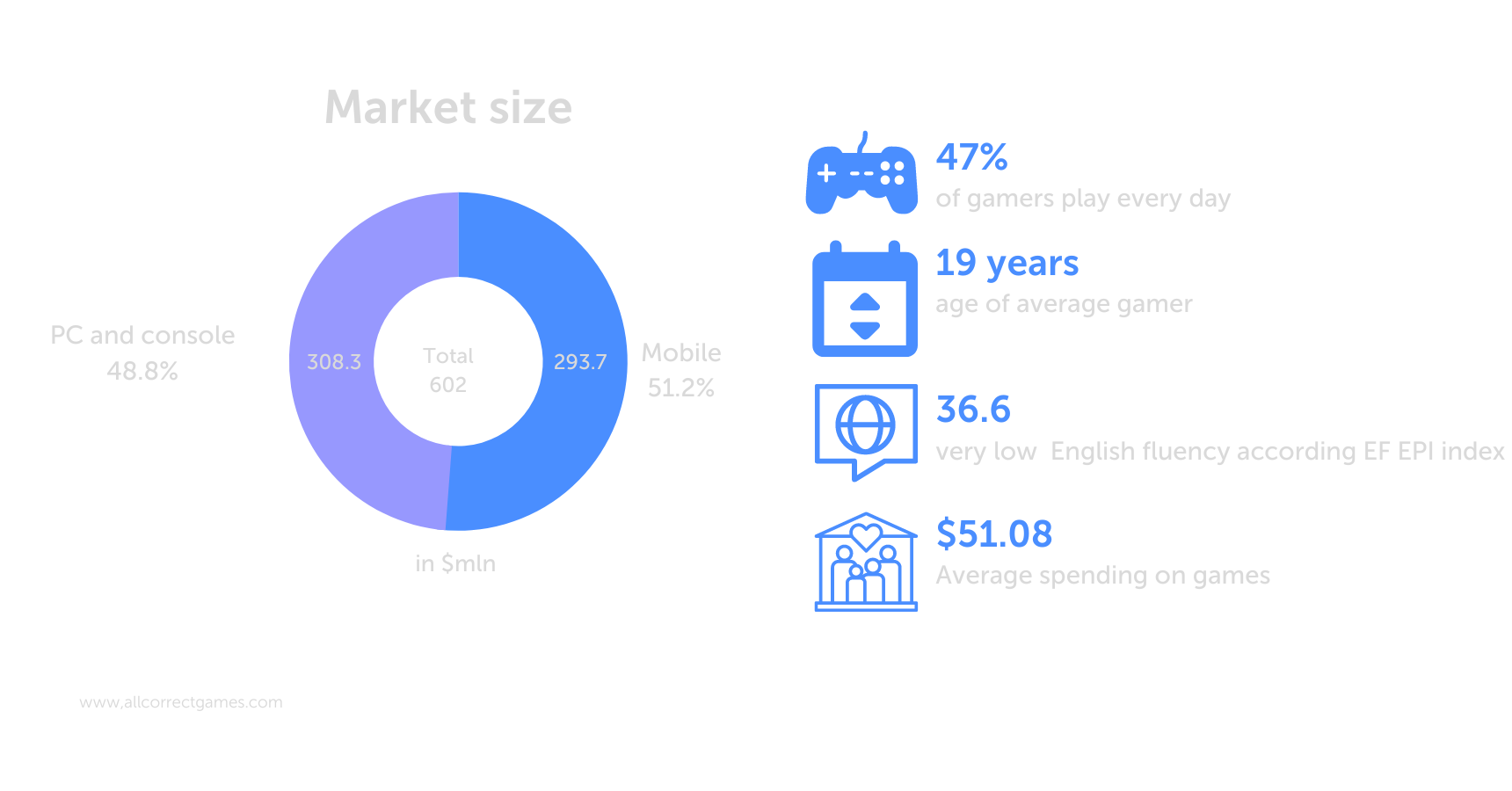 The general tendency is one of either stagnation or a drop in revenue (this situation will be observed in browser-based games, for example).

According to DIREC’s report for 2018, approximately 30% of Iranian users make in-game payments.

Games are steadily becoming more and more popular in the region. In 2019 approximately 36.3% of the population plays video games, and by 2023 this number will increase to 39.7%.

Needless to say, Iranians’ low purchasing power has had an effect on the cost of traffic. According to Chartboost, the average cost to attract a player to iOS is USD 0.38, while it is USD 0.20 to attract a player to Android. The most expensive genres are RPGs, simulation games, real-life apps, and strategy games. But there’s also an interesting factor at play here.

The App Store and Google Play are officially banned in Iran. However, this hasn’t prevented Iranians from using international platforms via VPN. In-app stores such as Cafe Bazaar (over 40 million users), Plazza, Myket, and Iranapps are also popular. According to the latest research (dated 2015), the revenue from these platforms is USD 40 million. It’s therefore not entirely clear how Chartboost calculates the cost of attracting Iranian players.

The Android statistics provided by Techrasa are interesting: in 2018 the number of downloads increased by 98% compared to 2017. 151,000 apps from over 23,000 development teams have been released on Cafe Bazaar.

All guidebooks highlight a number of mobile operators with SIM cards that are available for purchase, including MTCE, TCI, TKC, and Irancell (MTN). They provide the best coverage and aren’t very expensive. You better buy a SIM card as soon as you walk out of the airport because the offices of mobile operators are hard to find in cities. You can add funds to your account using scratch cards purchased in stores. Operators are constantly offering different packs, but 3GB of internet access costs about ten US dollars. 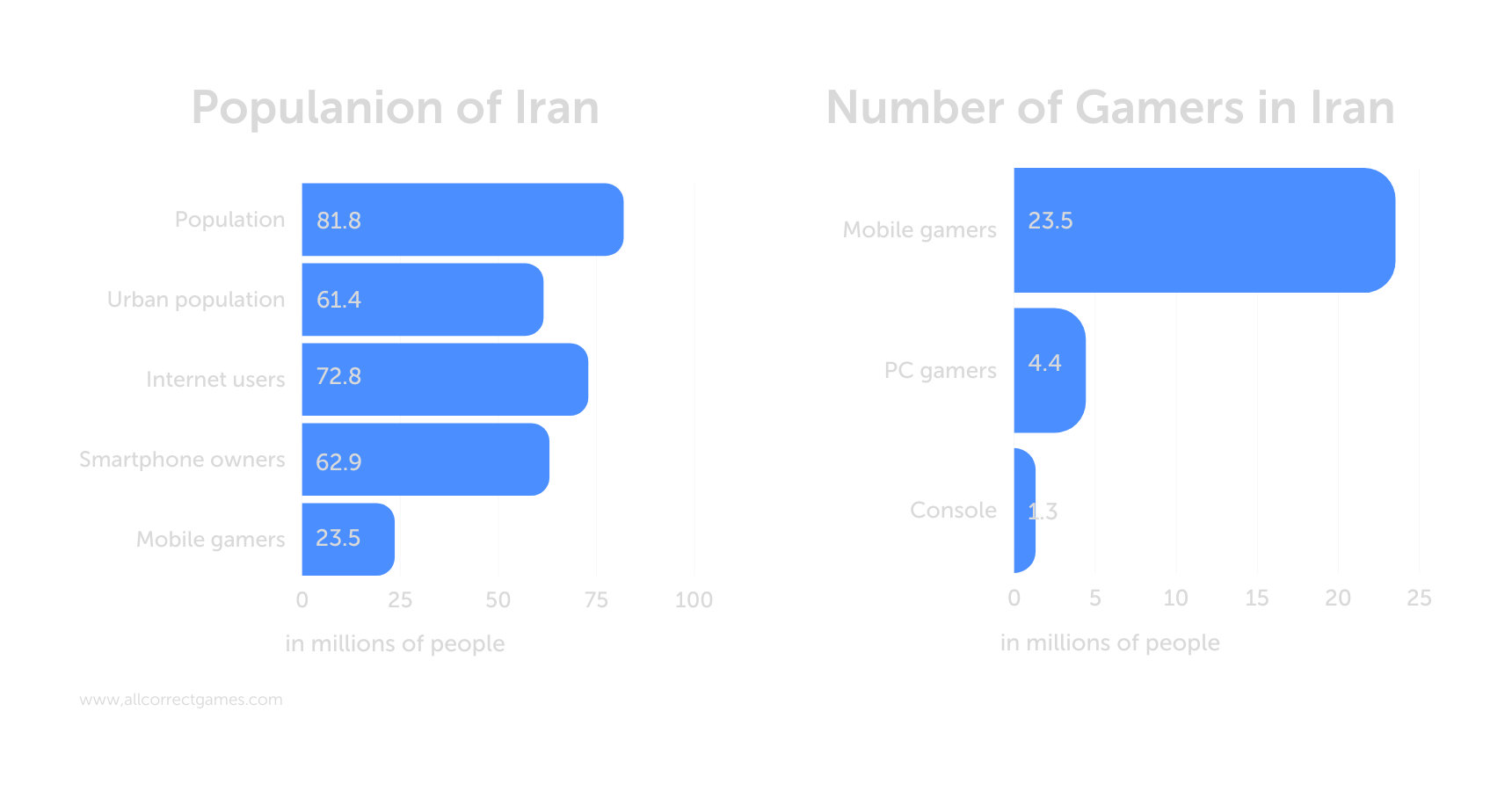 Approximately 53% of all players play on a regular basis — users who launch games at least twice a day are considered active. The average age of the Iranian gamer is 21. The market differs greatly from worldwide indicators in this regard (where the average ages are 35 for men and 44 for women). 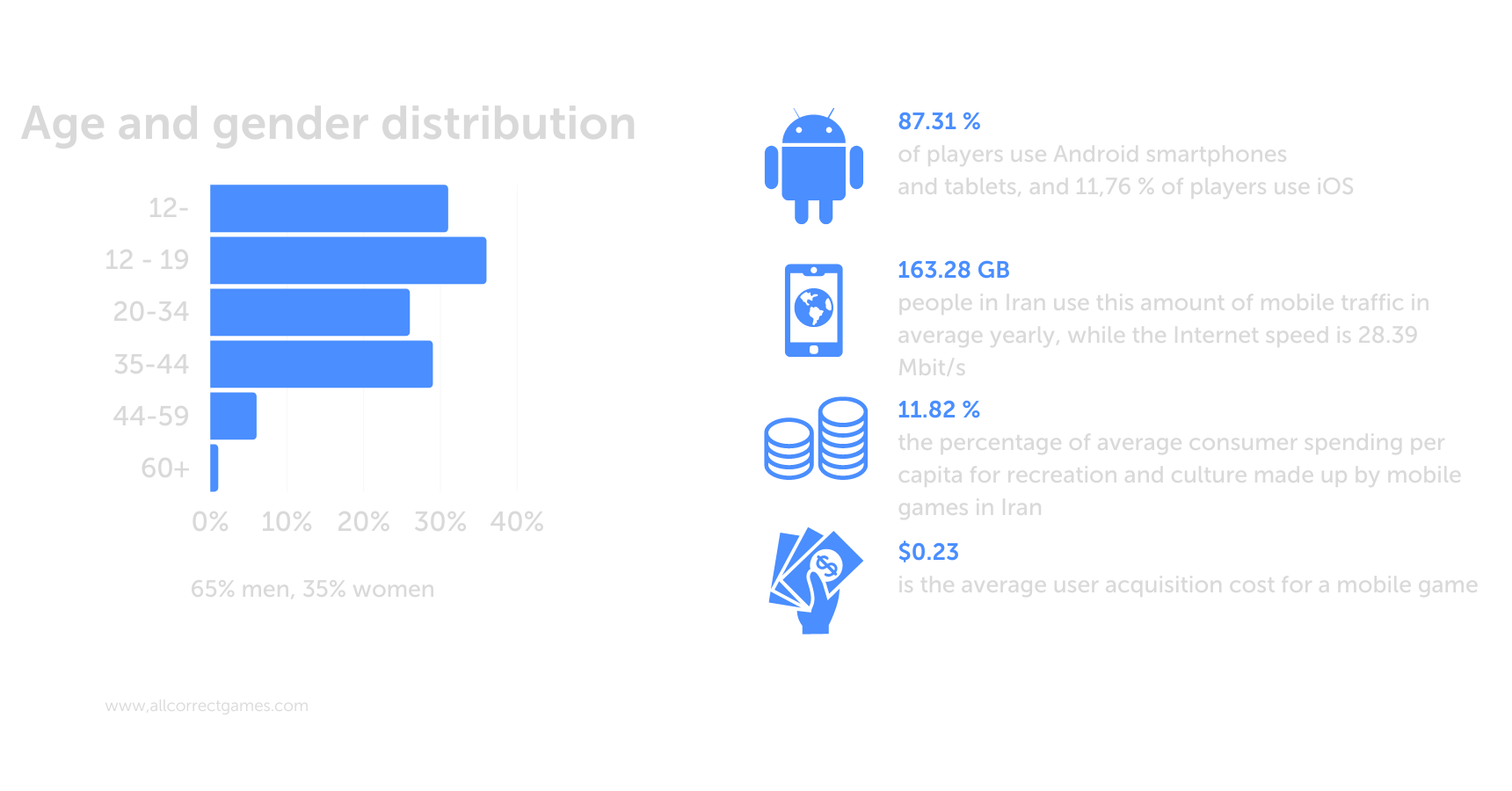 According to data from DIREC, active players play for about 79 minutes. Incidentally, this indicator counts mobile, AAA, and browser-based games, so the statistics are pretty fuzzy.

A social survey indicates that 93% of Iranian gamers prefer to play solo.

DIREC’s report also states that the game Subway Surfers has the most downloads. Clash of Clans was in the lead until 2019, but the game was banned for inciting violence and provoking “inter-tribal conflict.” The three most profitable games on the list are Mafia City, Toon Blast, and Rise of Kingdoms: Lost Crusade.

Research into domestic Iranian platforms has shown that the Iranian video game market is one of a kind. There are plenty of battle royale games in stores, but there aren’t very many RPGs or strategy games as in Europe or America. In addition, in-app stores have no gambling games at all—they’re illegal. 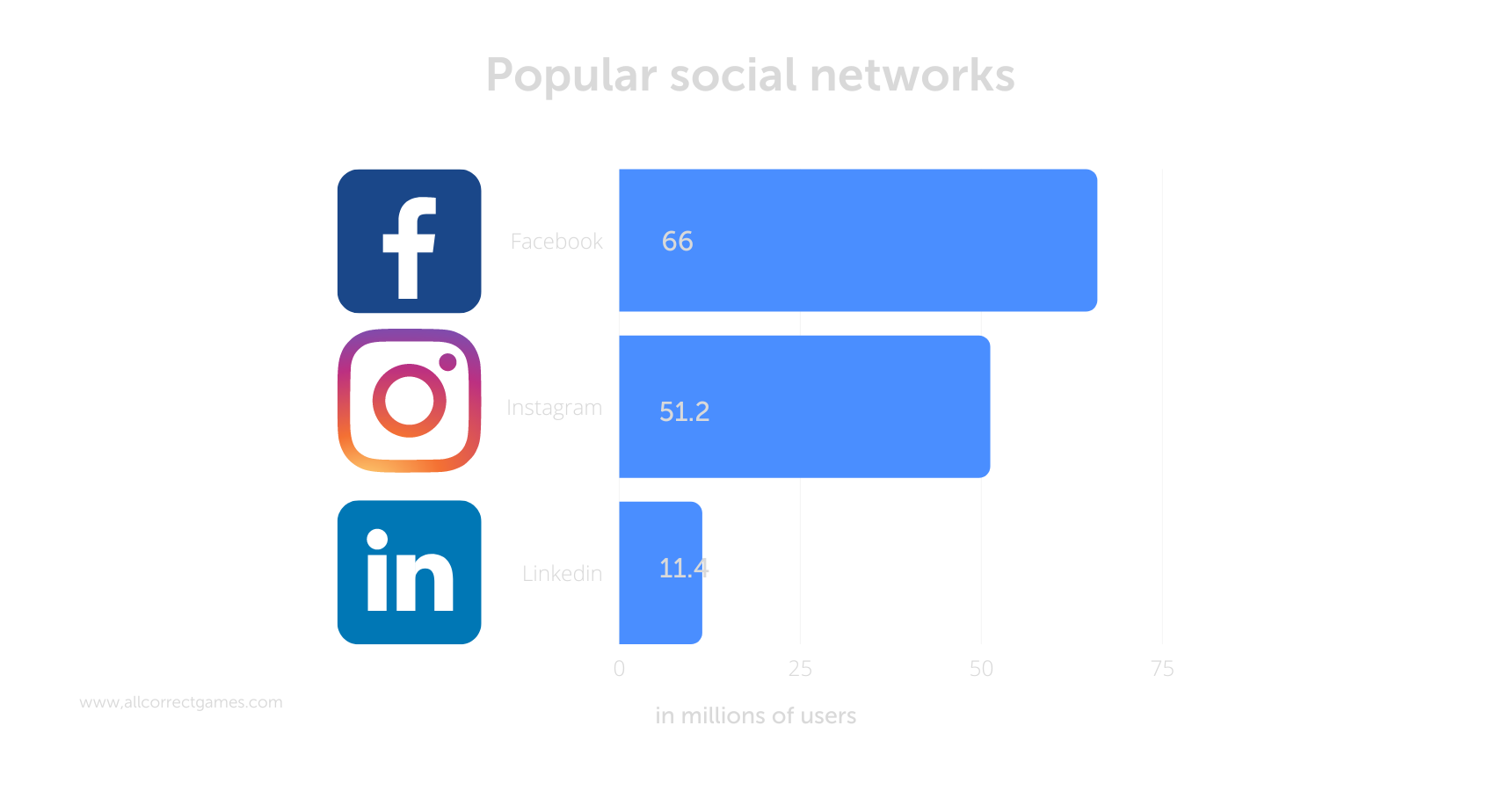 Culturalization for the Iranian Market

Iran is a pretty convenient country to launch an app in as long as your game meets the legal requirements and doesn’t contain any depictions of intense violence, nudity (especially female nudity), sex, references to gods, prophets, heaven or hell, depictions of alcoholic beverages and their consumption, or gambling. Depending on its content, a game may be assigned a rating by a special committee. The good news is that you won’t have to pay all that much to get your game officially rated.

Interestingly, Iran has its own calendar that is based on the movement of the stars and begins with the Hegira (the relocation of the prophet Mohamed from Mecca to Medina in 622 A.D.). This

calendar was invented back in the 11th century by a group of astronomers led by Omar Khayyam. The year begins on the day of the vernal equinox. According to this calendar, a year is considered a leap year if its number divided by 33 equals 1, 5, 9, 13, 17, 22, 26, or 30. There are eight leap years during each 33-year period, and the average length of a year is 365.24242 days, which leads to an error of one day every 4,500 years. The week begins on Saturday and ends on Friday, which is the official non-working day.

There aren’t all that many video games studios based in Iran. They include Benisi Gostar Media, Chocolate Land of Zeros and Ones, Ahura Software, ViraGostar Honar Hashtom, and a number of other developers and publishers. You can find a detailed list on the website of the Iranian Computer and Video Game Fund.

The development of the Iranian games industry has been greatly hampered by sanctions. In many cases foreign companies have been unable to open offices in the country because of them.

Incidentally, the Iranian government has done a lot to popularize the games industry. There’s even an Iranian National Video Game Federation that holds festivals and hackathons and helps new companies with financing, finding publishers, and staffing.

Local projects such as Garsharp: The Monster Slayer are very popular both in the region and abroad.

Journalists from Polygon have stated that it’s quite easy to get into local stores. The most popular app store among Iranians is Cafe Bazaar, which has over 27 million users. The store’s management is interested in increasing its software library and is eager to get in touch with foreign developers and publishers.

Interestingly, Iran has a Game Development Institute where programmers, game designers, and artists are trained.

The national language of Iran is Farsi (also known as Persian). It is spoken by 60% of the population, while about 40% of Iranians speak Azerbaijani.

The modern colloquial language is quite different from the literary language. There are differences in phonetics, grammar, syntax, and word formation. It wasn’t until the 20th century that writers began using a version of the language that was closer to the way people actually spoke.

In addition to Iran, Farsi is widespread in Afghanistan, Tajikistan, and certain regions of Pakistan.