Checklist on Working with Publishers for Indie Developers 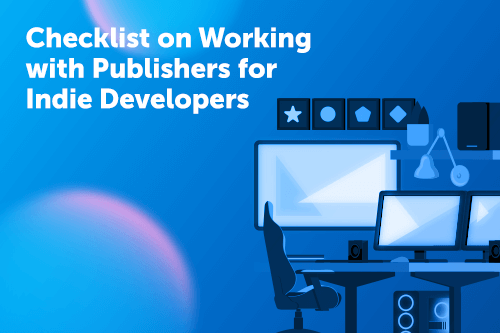 Our client list includes many indie developers. They often come to us with questions about the best publisher to work with (since we have a lot of publishers among our clientele too). In this article, we’ve collected recommendations that will help indie developers find the right publisher and arrange a “win-win” relationship with them.

Before you look for a publisher, you should figure out why you need one. Each one of them has a specialty. Some handle everything except game design, while others focus their efforts on advertising and promotion. First, determine what kind of help you need, be it project management, development, marketing, working with traffic, localization, analytics, or all of the above.

Then consider the games the publisher already has in its portfolio. Here, too, there are specializations. Some publishers work primarily with mobile “Match-3” games, others deal with fantasy RPGs, and still others publish games for a certain platform, focusing on projects with original mechanics or unusual visual styles…However, there are many publishers without narrow specializations.

From there, evaluate the readiness of your project. Nobody is likely to want to buy just an idea. When you’re at the prototype stage, then it’s time to consult publishers. If you have a fully-developed vertical slice, then the circle of interested parties gets much wider.

The next step you should take before contacting a publisher is to check their business reputation. If the publisher has been involved in legal conflicts with developers, carefully study the contract before you put your signature on it. Seek out opinions of other developers on forums or in group chats and check for mentions of the company in the news. The more information you have, the higher your chance of making the right call.

What Info to Have Ready About your Game

The publisher needs to get as much information as possible about the project you’re asking them to invest money into. However, no one wants to spend lots of time on an in-depth study of your game. So before meeting, prepare the following information:

For convenience, you can assemble all the text and graphical information into a pitch deck, AKA a short presentation.

Your chances of winning over a publisher are higher if you do a simple market analysis. Find your closest competitors (games with similar gameplay and setting released on your target platform within the last 12 months), study their performance, and check how realistic your plan is. This will help you and the publisher reach a decision about the right positioning for the game.

What to Ask the Publisher

The meeting is also a chance for you to evaluate the publisher, not just the other way around. So, don’t hesitate to ask questions: how profits will be split, what the predicted revenue is (a good publisher with experience working with games like yours will be able to answer this question), how many copies might be sold, and to what extent the publisher gets involved in the development process.

What to consider when signing a contract

So, you and a publisher have decided to sign a contract. They will most likely offer you a contract they’ve prepared. Remember that this version of the document is, first and foremost, beneficial to the publisher. Ask questions about the points that concern you and offer to make adjustments to them.

One sign of a good contract is if it contains a provision for an advance. If the publisher invests in you at the beginning states of cooperation, then they will be more interested in the success of the project.

How are profits split? The standard practice is to subtract the publisher’s marketing expenses (including localization expenses, platform commission, etc.), after which the profit is split proportionally between the publisher and developer. What proportion? There’s no standard answer: it depends on the specific publisher, the prospects of the project, and your ability to negotiate.

One other thing. One of the most important things to consider are the conditions for dissolving the contract. You don’t want to lose rights to your creation if something goes wrong. We recommend limiting the licensing contract to specific platforms, distribution areas, and licensing periods. For example, the App Store and Google Play worldwide, for two years. Make provisions for the end of the contract with return of exclusive rights to the developer on condition of failure to achieve certain indicators, for example, target sales revenue three months after the release date.

Lists of major publishers are publicly available online, for example on Wikipedia. Industry publications often release ratings and round-ups. There are both general round-ups and more narrow ones, i.e. for mobile or console publishers. Ratings are formed based on income, sales volume of published games, number of installs, and other formal or less formal factors.

We can recommend one of the publishers that we work with. If you’re interested, complete the form below.

In lieu of a conclusion

Publishers are just as interested in new, good games as developers are. When signing a contract, you get outside experience without which it is impossible to make a good game.

OK, fine, there are a few exceptions that just prove this rule. So, we wish you luck on your path to the top of the game charts!