Rise of Ragnarok – Asunder is a fantasy action MMORPG that allows players to adventure in mystical lands and take part in varied PvE and PvP battles. The beautiful and unpredictable world of the game is inhabited by various historical and mythological characters. Players can access around 100 pieces of equipment and several development paths on the long journey to immortality and saving the world.

The project lasted six months and was released on two platforms: iOS and Android.

Preparations for the project began with two parallel processes: working with the consultant sinologist and translating the glossary. The reference materials for the game were only in Chinese, so it was essential to find out if we were correct in our understanding of the glossary and the game world in general. The glossary contained the following terms: game interface elements, character names, companion names, the names of skins, relics, animal mounts, inventory elements, and game modes. The largest section was the monster names. This section required a high level of creativity, as the assortment of monsters included characters from Scandinavian folklore to Asian mythology, from monsters of the ancient world to relatively modern creatures. While the glossary was being translated, the consultant sinologist studied the Chinese version of the game and sent the team a brief description of the game’s plot and mechanics, screenshots of the interface, and answered questions about relationships between the characters. This meant that by the time the glossary translation was completed, we had a clear picture of the world of Rise of Ragnarok and only had to confirm the glossary with the client before starting the project in earnest. Confirming the glossary is a very important step, the entire translation process that follows hinges upon it. Fortunately, the client responded quickly to our questions, and feedback on the glossary was prompt. Of course, there were a few bumps in the road. We translated the character name “Undead Horse” as “Лошадь-нежить” and the client suggested changing the translation, since “не жить” was a verb. We explained that in this instance, it was in fact a noun. In some cases, we had to veer quite far from the original text, because we were provided with character images and stayed faithful to the character’s actual appearance rather than the text. For example, the final translation of the character name “Deadeye Gremlin” was “Меткая фея”.

The biggest challenge throughout the translation process was the string limits, since it was a mobile game and space in the interface was limited. The original Chinese text looks good in the mobile interface, as it is compact, but when it came to the Russian version, we had to shorten words. In some cases, our workarounds were not very attractive, but we strove to make the abbreviations as clear and as familiar as possible to players.
So, once we had confirmed the glossary and studied all the provided materials, we got to work on the translation. Over six months, we translated seven batches in total and a multitude of additional files, which amounted to approximately 250,000 words. The team’s maximum daily output under peak workloads was around 3800 words a day.
We communicated with the client via two Google Docs: one Google Doc was for questions related solely to the Russian localization, and the second was for questions related to localization into other languages. Thanks to the client’s responsiveness, we were able to meet our deadlines and select the most apt translations for the source text.

The team did not have images for all characters and items, and there were inconsistencies in the English text, so during the translation process we sometimes had to choose the best translation option based on our experience and intuition and by comparing the original Chinese text with the English. Chinese is more figurative language, which is why the comparison was useful.

The vast majority of interface texts had strict character limits, which meant that many texts had to be ruthlessly shortened.

Variables presented a particular challenge, and they cropped up constantly in the English text. The meaning of many of these variables was a mystery to us. To compound the problem, the client had prohibited us from changing the order of the variables in any string due to the possibility of causing a bug in the game code. We had to construct the phrasing in Russian so that the variable sequence in the translation matched the original. To avoid problems with inflections that could indicate the wrong gender for a character or create an issue with grammatical cases, we often used present tense and gender-neutral words. (For example, “%s encountered %s on an expedition. %s won. %s received %s” was translated as: “%s встречает в экспедиции врага: %s. %s побеждает. %s получает: %s.”)
The original Chinese text helped us a great deal. Whenever we had doubts about the accuracy of the English translation, which initially served as our team’s source text, we checked those strings in the Chinese text. And good thing we did! The translation from Chinese into English, as the client informed us, was performed by several translators, which produced inconsistencies in the terms used. (For example, both “Guild Hall” and “Great Hall” were identified as 议事厅 in the Chinese, as they were the same place. “Midheim” and “Midgard” also turned out to be a single location.) Translation errors like these would naturally cause confusion among players, and this could prove fatal in a game with a non-linear storyline: the player would fail their mission! Our team painstakingly identified all inconsistencies between the Chinese and English texts and reported these to the developer. As a result, we were able to not only achieve consistency in the Russian translation, but also to help the client edit the English text by pointing out errors.

We also encountered difficulties when translating the dialogues. In the lockit, dialogues were not presented in chronological order, the start and end of conversations were not marked in any way, and sometimes character names were missing, so we didn’t know who was speaking. The translators and editors followed the logic of the narrative and any time we were unsure about the gender of the speaker or their role in the story, or if the structure of the dialogue was broken, we asked the client for more information. The client responded swiftly to all initial and follow-up questions and helped our team deal with the minor infelicities in the English text. For example, according to the lockit, the phrase “I’m really good at looking at pretty girls. One look and my feet stop working” (literal translation: “Я отлично умею заглядываться на девушек. Только гляну, и аж ноги подкашиваются”) was spoken by a female character, the archangel Dariana, and this didn’t fit with her gender or her backstory. In response to our query, the client explained that the translation into English was incorrect: Dariana was speaking about a male character.

Despite the flaws in the English text, the strict string limits and the differences in the artwork, our team’s collaboration with the developers allowed us to give players the chance to experience the world of Rise of Ragnarok, full of diverse characters, unusual locations, and amusing dialogues.

YOOZOO Games (previously known as Youzu Interactive) is a global entertainment company specializing in game development and distribution. The company is headquartered in Shanghai with offices in London, Berlin, Hong Kong, Singapore, and other major cities. Since its founding in 2009, YOOZOO has launched a multitude of highly successful products and forged a global distribution network. Popular role-playing games Legacy of Discord – Furious Wings and League of Angels series have helped YOOZOO Games become an industry-leading game publisher. 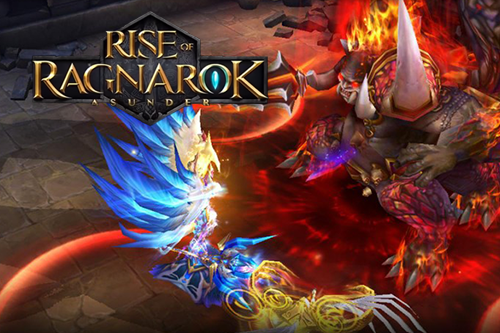