Team: 35 people, including 25 translators and 4 editors.

It’s unlikely that you’ll find even a single gamer who hasn’t played Age of Conan, but few know that Age of Conan: Hyborian Adventures was localized by All Correct’s experts.

Age of Conan: Hyborian Adventures is a fantasy-themed MMORPG developed by the Norwegian video game development company Funcom and published by Eidos Interactive.

The fact that the game sold one million copies within just six days of its release speaks to its popularity.

1C Company was granted rights as the Russian publisher of Age of Conan after signing a Service Partnership Agreement with Funcom in July 2008. The conditions of the partnership stated that 1C was obliged to fully localize the game for a Russian audience and market it online.  In spite of the mountain of work this involved, the Russian version of Conan was complete just 6.5 months later. On 20 February 2009, the game hit the shelves.

After signing an agreement with 1C Company, All Correct took on the responsibility of translating the game into Russian. This included the character’s dialogues, the game’s interface, and descriptions of quests and equipment.  1C Company demanded that the translation be done as soon as possible; Russian players couldn’t wait for the Russian Conan to be released.

The collaboration with 1C placed two main demands on All Correct.

Without the text, 1C’s voice actors and development, marketing and logistics divisions couldn’t start working on the project. For this reason, it was important that All Correct Localization’s translators finished their work within three months. The game’s release date depended on this.

In working with a video game known all over the world, 1C couldn’t accept anything less than the best when it came to translation quality. Even the smallest defects or inconsistencies would be immediately recognizable to the players, who usually thoroughly explore the in-game worlds. The quality of the localization and of 1C as a publisher depended on the translation quality.

But it wasn’t that simple…

All Correct’s managers performed an initial analysis of the text, which revealed two problematic issues.

“Buffer”, “DPS”, “AoE” – these terms are familiar to all MMORPG players, and they’re usually transliterated (“баффер”, “ДПС” and “AOE”). In the translation’s official literary version, they needed replacements that would be understandable to experienced players and novices alike. All Correct made it happen.

In the world of Conan, each item of equipment has its own modifier which characterizes a specific aspect of the equipment. For example, the “of Dark Terror” modifier indicates enhanced regeneration. This modifier can be used for various equipment items, so it was important to maintain consistency when translating these expressions.

Moreover, the translation had to take into account Russian psychology and set expressions. For example, Russian players will be perplexed by a literal translation of “Boots of Justice”. In this case, “Sword of Justice” works far better.

As you can see, these were no easy tasks. Accepting that the speed for high-quality translation is on average two thousand words per day, we calculated the manpower requirement at 450 person-days for 900 thousand words. At that moment, it was important to assemble a team of strong translators and organize their collaboration with their editors.

Our personnel selection expert sent invitations to several hundred Russian translators, and roughly 150 of them responded, sending their CVs to All Correct. Immediately afterwards, the candidates received test translation tasks. The test translations were graded according to our in-house method for rating translation quality, and the translators with the best scores then underwent an interview before joining the project. As a result, we had selected the best of the best – 25 translators and 4 editors.

The most interesting and also the most difficult parts of the translation were:

We overcame all these challenges. Thanks to careful project organization, the game’s text was localized within the deadline – in just 2.5 months.

1C’s localization department performed an additional check of the translation quality and was pleased with the work. This confirmed a subsequent translation contract for the game’s updates and patches. The translation was then integrated into the game and tested.

The Age of Conan project stood out for its sheer size. It’s a massive game with a gigantic world. This was the first time we set out to localize an MMORPG.

From the very beginning it was clear that only a large team would be capable of completing all the work within three months. We had to assemble a team of translators with experience in online RPGs, and it’s not often you can find gamers who are professional and know how to organize their time. The project’s success fully depended on how it was organized: the editors’ effectiveness, the level of collaboration with the translators and the quality control.

The press on the Conan localization

The massive online RPG Age of Conan certainly drew the attention of journalists. Reviews and interviews about Conan’s localization appeared on many portals, including the large gaming site ogl.ru and the news portal lenta.ru.

1C Company was founded in 1991. Since its founding, the company has transformed into a huge publisher and distributor of video games in Eastern and Central Europe. 1C also developers its own games at the studios it owns. Its most well-known games are IL-2 Sturmovik and Theatre of War. 1C collaborates with independent studios to publish projects for consoles and the PC. The most famous of these are Space Rangers, Hard Truck, Soldier: Heroes of World War II, Death to Spies, Fantasy War, Perimeter and King’s Bounty. 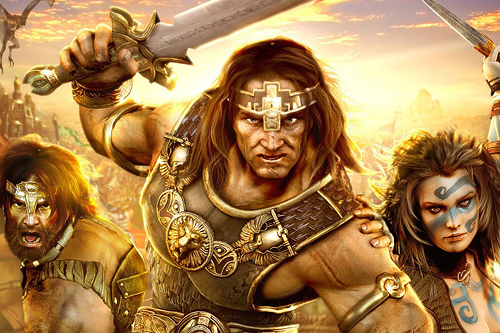