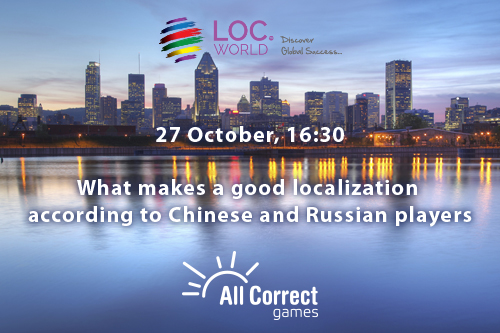 The All Correct team surveyed Russian and Chinese players about what is important to them in game localization. We asked end-users about which games they consider well translated and which they prefer to play in English, whether it is important for games to be adapted for the cultural values of their countries, and whether they’re willing to pay more for a well-localized game.

On October 27 at the LocWorld conference, company partner Yury Petyushin will share the survey results and talk about the future stages of this project.

Please send requests for a meeting to pr@allcorrectgames.com

ABOUT ALL CORRECT GAMES

All Correct Games works with the majority of Russian game developers and publishers, as well as with the largest international game publishers. The company has participated in the localization of over 350 games and the testing of over 100 games. All Correct Games works in more than 20 language pairs, partners with 6 voice studios, and employs highly competent native foreign language and Russian speakers to test games on the iOS, Android, and PC platforms.