Green Riding Hood is an interactive game for children from 3 to 6 years old. The main subjects of this fairy tale are friendship, yoga and a healthy lifestyle. Special attention has been paid to the quality of sound and graphics in the application. The author of the idea and all the images is the famous illustrator and Cannes Lions award winner Andrei Gordyeyev.

Our team provided the voiceover for the background narration in Italian, while the characters themselves were not given voiceovers. The main requirement of the client was for the special fairy tale atmosphere of the story to be conveyed. The narrator did not have to use any kind of special intonation—the way they spoke had to sound natural and authentic to native Italian speakers. As the client requested, we sent them several samples of voices that we considered suitable for the project. Bobaka then selected the narrator that they thought would best convey the atmosphere of the game.
The special feature of this project was the urgency of the task, as we only had three days to choose the narrator, make a recording and work with the sound. These days also happened to include the weekend. However, working to tight deadlines and during the weekend was nothing new for our team, so the project was completed right on time.

Bobaka is a digital agency that manages media projects with an audience of millions. It  develops and publishes mobile games and applications for children. Most of the projects published by Bobaka reach the highest ranks in the App Store and Google Play in Russia and around the world. The company works with responsible and creative developers, helping good children’s brands enter the digital market. 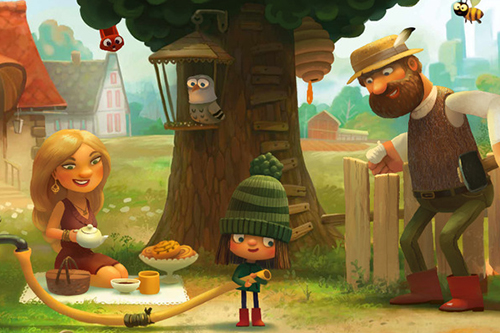