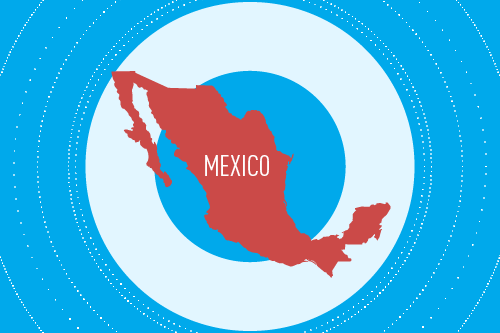 The United Mexican States is a country in southwest North America. In geographical terms, 12% of the country’s territory, including the Yucatán Peninsula, is located in Central America. However, in geopolitical terms, Mexico is considered a North American country. Its capital city is Mexico City. Its de facto national language is Spanish.

The total area of Mexico is 1.97 million km², around 6000 km² of which are islands in the Pacific Ocean, the Caribbean Sea, and the Gulfs of Mexico and California. Mexico is the thirteenth largest country in the world.

Mexico is known for its caballeros and native Mexican heritage, the works of Frida Kahlo, the films of Robert Rodriguez, tequila, Aztec and Mayan pyramids, stunning resorts on the Caribbean sea, as well as the existential experiences of William S. Burroughs and Hunter Thompson.

The Mexican mobile communication market is controlled by Telcel with relatively high charges, which somewhat hinders the spread of mobile technology.

Who plays mobile games in Mexico?

Mexican gamers like games of chance, casino games in particular. What is more, only in Mexico’s 100 top-grossing mobile games chart you can find a game where the goal is to build your own cartel. We also believe that a mobile game about wrestling would be popular among Mexicans.

The media and other sources also highlight the following Mexican developers:

Of special interest is the games publisher and business incubator Games Starter.

Although Mexicans speak Spanish, the Mexican variant differs from Castilian (European) Spanish in speech and written form. Mexican Spanish is more rigid and archaic and contains words from indigenous languages (many are familiar to us: chocolate, cacao, Chihuahua, tequila) and is influenced by English.

Mexican Spanish is understood not only in Mexico, but also throughout Latin America and the southern US. Mexican Spanish is the mother tongue of approximately 125 million people—accounting for around 29% of Spanish speakers worldwide.